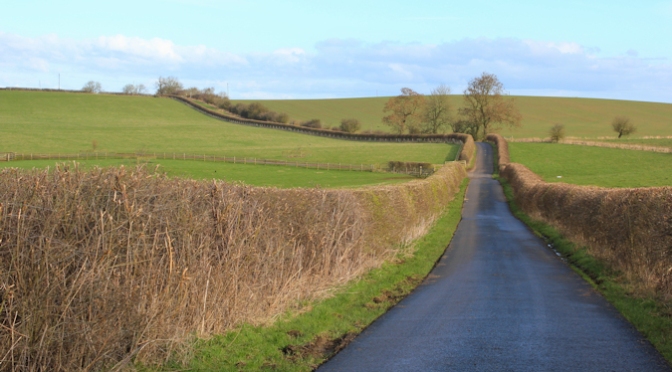 It was Sunday and Valentine’s day. The forecast was cold with a stiff breeze, and sunny intervals. What better way to spend the day than going for a walk?

But the weather hasn’t been kind to us this winter. Storm after storm has blown in from the Atlantic and the ground is saturated. So, to avoid the worst of the mud, I chose a route that involved mainly road walking. Tarmac might be hard on my feet, but it’s better than wading through quagmires.

My husband dropped me off at the village of Tugby. From here, I crossed over the A47 and set off walking northwards along Wood Lane, following signs for the cycleway, route 63.

After a couple of miles, at Oxey Cross Roads, I turned left and walked in a north-westerly direction along the quiet road that runs parallel to the dismantled railway line. (In dryer weather, you might be able to walk part of the route of the railway line itself, although it’s not marked as a public right-of-way.)

The road skirted around the southern slopes of an impressive hill. At its top lies the remains of an ancient enclosure, but I didn’t climb up to investigate. It’s called Robin-a-Tiptoe Hill. What a romantic name. Or maybe not…

Legend has it that Robin, a sheep thief, was hanged from a tree on the hill. But Robin saved himself from strangulation by standing on his tiptoes and, when found alive the next morning, was pardoned.

The route I followed led between Robin-a-Tiptoe Hill and Colborough Hill. It was lovely, quiet walking, with the only traffic being a couple of farmers with their sheepdogs in a battered Land Rover.

After a mile, I took the first right turn, following another very quiet road that skirted the western flank of Robin-a-Tiptoe hill, running through a scenic estate. At the end of this road, I turned left at the crossroads and, after a few hundred yards, joined the B road that runs from Oakham to Tilton-on-the-Hill. I turned left, westwards, towards Tilton, and met the first real traffic since I set off.

I left the B road at the first opportunity, taking a right turn up Hyde Lodge Road and heading north towards the tiny village of Marefield.

This road was a joy, curving slowly westwards, and rising up over higher ground with great views over the rolling, Leicestershire countryside. I met a solitary dog-walker and two sets of cyclists. Nobody else.

As I approached Marefield, I was on the lookout for a couple of tracks that would take me in a southerly direction towards Tilton-on-the-Hill, where I was meeting my husband for lunch. Both these tracks are public-rights-of-way. But somebody has removed the signs. I completely missed the first track (optimistically called Red Lodge Road), but found the second one (called, prosaically, Marefield Lane).

Down this Lane I went, leaving tarmac behind, and encountering the first serious mud of the day. There were two fords marked on my map and two bands of moving water to wade across. I stopped by the first one. It was narrow and I might have been able to jump across, but I didn’t know how slippery the stones were on the other side. They looked green and slimy. So I pulled on my waterproof socks and splashed across.

The second ford was even wider and, although somebody had put a tree branch down as a makeshift bridge, I decided not to risk this wobbly piece of wood and waded through the water instead.

This was the first time I’d properly tested my waterproof, Sealskinz socks in the field, so to speak. At first I thought they’d let me down, as an ominous chill seeped around my feet. But then I realised it was just the cold temperature of the water as it permeated my shoes, giving the illusion of wetness. My feet themselves remained completely dry. Success!

Later on, after a patch of nasty mud, I met tarmac again. This was the junction of Red Lodge Road (the one I’d missed) and my own Marefield Lane. A sign at the entrance to Red Lodge Road said ‘Private’. Really? I don’t think so.

Further along I met a couple of horse riders. One of the horses insisted on nuzzling me, apparently after the food in my rucksack. But I had no suitable snacks.

Two miles after leaving Marefield, I was in Tilton-on-the-Hill, and the first thing I saw was the pub. It had an open fire, a proper ‘local’ feel, and excellent pub-grub at a very reasonable price.

6 thoughts on “Tugby to Tilton: walk along quiet roads in Leicestershire”

Your comments are welcome... Cancel reply